We have been tasked with creating a 3D model based on the brief we were given for our game and with the brief we have been given being 'Killer Klowns From Outer Space' i have made an evil clown model. 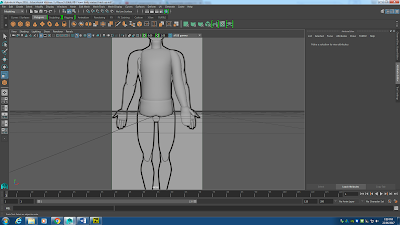 To start the model I loaded in a reference image as an image plane. I used a rather standard human body shape as a reference to get the basic silhouette of the model. I started with a polygon cube and changed the amount of vertical and horizontal subdivisions the cube has in order to make the process both easier and to get far greater detail on the model before selecting features such as the faces, edges and vertexes to pull and move each segment into the right place. After i had the polygons of the model in the right place i used the smooth feature too round the edges of the polygons and make it generally more visually appealing. I applied the same process for the limbs on the left side, neck, head and the waist. 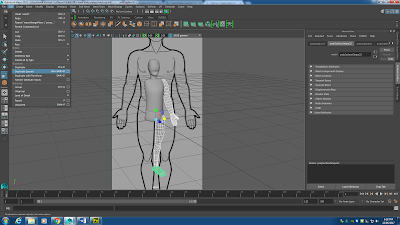 Then i edited the head so a portion would dip inwards slightly, creating a mouth. After I had done this I went about duplicating the parts that needed to be done. I selected the appropriate parts all at once by holding shift and clicking on each part, then I selected the duplicate special feature from the drop down menu, after editing some of the info about the parts it created a mirrored duplicate of each part which i then moved into place. This feature saved me a great amount of time and reduced the chance of errors making the limbs on the other side unsymmetrical. 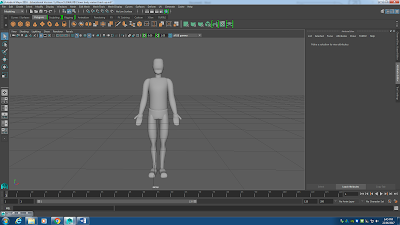 Next I removed the image plane as i no longer had need of it and then simply edited some of the dimensions and way each part was placed in order get the slightly inhuman look I wanted. After this I selected the entirety of what i had made so far and then used to combine feature to group all of the parts together as one larger mesh. 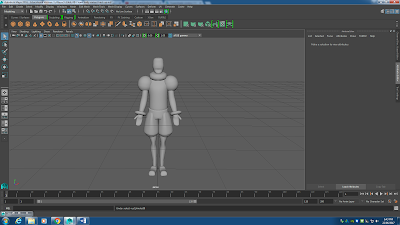 Following this I began to create the attire for the clown by using images of clowns such as depictions of Penywise the clown from Steven King's novel 'It' and the clown outfit the artist David Bowie wore in the music video for his song 'Ashes to Ashes'. i then used simple polygon spheres that i had flattened slightly on certain sides to create the large bulbous shoulders, then I took some far more flattened polygon spheres to use as the ruff like collar of the clown's top as well as the large bottoms of his gloves. After I used some polygon cylinders I edited as the basis for the baggy shorts the clown wears. 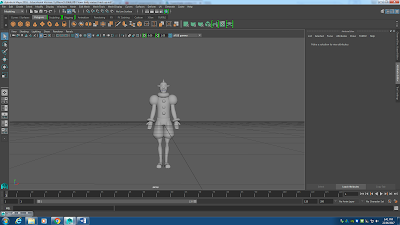 The next step was adding the details and features of the clown. I decided i wanted to give its face a somewhat cartoonish look so chose to go for large and striking yet simple shapes. I once again took a polygon sphere as the nose for the clown before taking more spheres and adding them down the front of the clown's top in order to make it seem less plain and bland. Then using more spheres I began making the eyes by flattening and stretching them out to create the large cartoony irises and then taking yet more spheres and shrinking them down and flattening them down in order to make the pupils of the eyes. Then i used a polygon ring to make the lips which I had to stretch and bend in order to fit the shape of the mouth. Next i added polygon cones for the hair on the head before finally adding more cones to use as fangs in order to make the clown seem more sinister. 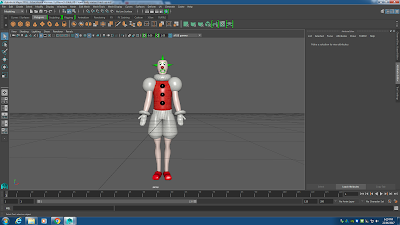 The final step was texturing the clown. I highlighted the whole model and used the separate feature to make each individual part once again easily selectable so that i could give each part the texture it needed. The way I put the texture on was by selecting the part and then choosing to add new favourite material to it then selecting the lambert option from the menu that appeared. Certain areas such as the hair, skin and body merely needed a change of the colour of the lambert but other parts like the gloves, shoulders and shorts required me to upload an image in order to get the texture of cloth that i wanted on those areas.

Additional: This was actually the second version of the model I created as I had initially struggled with the creation of the model as I was relatively new to using the software. Roughly two thirds of the way through creating the first model I became very unhappy with what i had made and decided to scrap it and start again, thankfully being more experienced with the software i was able to create a model I was far happier with in a considerably quicker time. Though i am pleased with the finished result i would have liked to create a more detailed hair a,d a better shape for the head.